Appointed missionary for Will County, Anton August Philip Weyel, was not satisfied serving one place, he fully intended to carry out his commission to spread the Good News of Jesus Christ. Traveling on foot, with his gun and retriever, Phylax, Pastor Weyel visited many Chicago area places. On his journeys he found Lutheran families in Frankfort township and decided to help them organize a congregation. In May 1850, he moved to the Hickory Creek settlement and began serving these families. 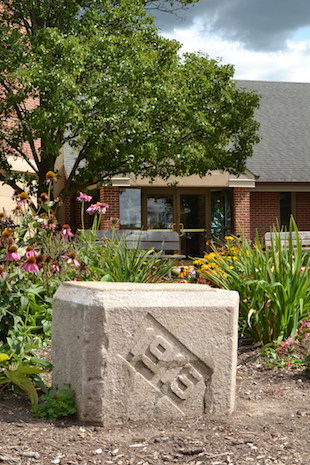 Johann Georg Geuther gave a gift of 2 acres of land at 88th Ave. & St. Francis Road. A small wooden church was built. Inside the church was the pastor's family's living quarters. The church served the congregation for 26 years. During the first 23 years of ministry, Immanuel was served by seven pastors until in 1875 Pastor Elias Hieber was called to Immanuel and ministered for 41 years until 1915. It was on Easter Sunday, in a congregational meeting that Pastor Hieber was granted a peaceful release from the congregation and also it was unanimously resolved to move to Mokena.

In 1916 Immanuel joined the Lutheran Church Missouri Synod (LCMS) - during the Northern Illinois District convention. It had no prior affiliation, although it was served by Missouri Synod pastors throughout its history. In the year 1919 English services were introduced, the Ladies Aid Society was organized, Sunday School was reorganized and a day school also was opened and taught by the Pastor. Ten years later, however, the school was disbanded. In 1939 the Ruth Society was organized. In 1948 a two-manual Wicks pipe organ was installed.

In the spring of 1955 land was purchased on LaPorte Road for "Building for the Future." The parsonage was built on this land in 1960. Finally in 1964 ground was broken for a new church building and the building was publicly dedicated on May 15, 1966. The outdoor worship center was dedicated on July 29, 1975. Membership was on the rise beginning in the 1970's.

Heritage Hall (the gym) was dedicated on March 6, 1983 and this building allowed for fellowship and the space necessary for dinners and recreational activities.

As Immanuel celebrated its 150th anniversary in 2000 and continues to minister in the same Spirit of our forefathers, we realize the importance of our name, Immanuel - "God with us," persists even to this day.  With the Lord's guidance, Immanuel can and will go on to celebrate more anniversaries in the future as we remain faithful to our mission of "caring and sharing."